In June this year I embarked on the Shenanijam 2018, organised by the folks at Butterscotch Shenanigans!  Rich of my experience joining the first Shenanijam last year (which I blogged about in this old post) I tackled things slightly differently this time round.  I thought I’d write a quick shenanijam postmortem for my 2018 entry: StickAss, as well as compare what I learned and applied from last year!

My first ever Game Jam was the Shenanijam back in 2017.  Although a great experience, it turned out to be a gruesome weekend of hard work and somewhat mixed results.  I produced a game (my previous shenanijam postmortem is there: Melt’ Them All) which I later took off itch.io because it wasn’t particularly good.  The game (sort of a 2D Splatoon) came #23 overall, with quite average scores against its overall fun and balance.  Looking back, I feel like I tried to tackle too much.  The game included both single and multiplayer modes.  Gameplay was somewhat complex and I feel I had spread myself quite thin building the game.  Nothing particularly stood out!

This year, I was determined to shrink down the scope and produce something with a tight but satisfying gameplay.  Reasons were two-folds: I didn’t want a repeat of the previous year (hours or work & little sleep for mixed result), and my wife was far into her pregnancy and could go into labour at any point!  I therefore had to cut corners and bring down the game to a simple but satisfying mechanic.  How did that go?  Read the rest of this shenanijam postmortem to find out!

There were three themes to choose from, which was a great help as only one (“Sticky Justice”) inspired me.  I am a big fan of super hero and vigilante movies so I was confident I could definitely draw ideas from it.  Also helpful were the achievements the Butterscotch team added to the jam.  These were optional constraints aimed at making things more challenging, but on the contrary I found these helped me a great deal tightening the scope!

I was going to tick both Maverick & Buttersmooth Tools without extra effort, as my plan was always to go solo with Game Maker and Inkscape.  “3bit colour Palette” (restricting the game’s colours to a 3 bit RGB palette) really struck a cord with me, as I thought a limited colour palette might help producing the art for the game fast.  So did “One Punch Man”, producing a game controllable with a single input.  I love the simplicity of mouse controlled game and opted to build gameplay around this.

Coming up with a concept

The rest came super naturally.  I wanted to build a simple action / physics-based game, as I could draw on my prior experience building Holey Suit.  The vigilante theme was particularly inspiring and I quickly thought of a project name: Sticky League of Justice.  I just needed to figure out what these sticky vigilante do!  The best use of the colour palette would be high-contrast graphics.  I recalled a game I had played prior on my phone, Big Hunter, with eye-catching mono chromatic graphics, and also some physics based combat.

Throwing stuff at enemies was a good fit for a physics game, but somewhat felt limited.  I then had the idea: why not let the player/vigilante throw himself?  This is where the Sticky part of the theme fit snugly into place: the hero would throw himself at obstacles and stick to them.  Bam!  After considering a few options playing with this idea (hand-made levels vs procedural generation, puzzler etc) the most natural fit seemed an infinite runner, where the player fights gravity to climb between buildings.

Overall I think I was lucky with the theme and achievements, as this led rather naturally to a solid game concept, all under a hour!

I decided to prototype Sticky League of Justice and see how it played out.  The logic was actually quite simple to put in place (I took a few shortcuts on the maths!) and in a few hours had a playable version with circle & boxes which felt quite good.  Thanks to the Shenanijam being a 48 hours jam spread across 72 hours, there was no huge pressure to work into the night and I called it a day early in the evening.

Day 2 of the jam was really about consolidating gameplay.  I had the firm intention of having something “publishable” by the end of the day as my wife was expecting and due anytime at that point.  My objectives were therefore to elevate the graphics to an acceptable standard and add enemies to the game.  I decided to use Inkscape for speed; since my colour palette was restricted the art had to be minimalist and based around simple shapes.  This turned out to be an advantage, as I was able to draw game assets really quickly.  Anything done in Inkscape could also be copied/pasted straight to Game Maker!

My inspiration for the look & feel of the game (the game includes wall jumping!) was The Swindles, with its near-monochromatic graphic style and steam-punk look.  I decided to have black walls with yellow windows as the staple graphic, along with some cool looking “vigilante” character which I would draw in monochromatic silhouette style. 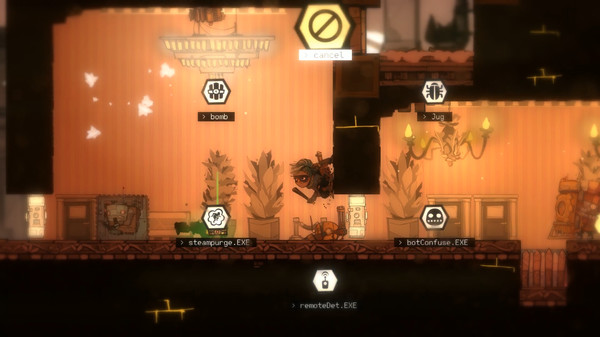 I also opted for a dynamic visual effect by flipping the camera angle to follow the player’s mouse.  This added a heck of a lot of juice to the game, whilst being really simple to implement!  In the end the game ended up looking like the screenshot bellow.  Basic but eye catching! After nailing the main movement mechanic & art style, I eventually had to tackle enemies and AI!  I wanted to get the game to a publishable state by the end of the day and decided to cut corners as much as I could.

For my first enemy, I wanted something I could code easily and fast.  For this the best function available in the Game Maker arsenal is mp_potential_move, which handles everything from simple inputs (target coordinates & what to avoid on the way).  I didn’t want to trouble myself with an enemy that can move and shoot, so close contact / exploding on collision seemed the way forward.  The dumbest/easiest enemy I could think of was therefore a flying bomb, that would slowly get closer to the player and explode on collision!

I needed another enemy type to keep gameplay interesting.  I decided on an enemy that can shoot at the player.  That enemy would also be static to keep things simple.  Snipers attacking from windows felt like a good match for the job!  I needed their attack to be predictable so it could be avoided with the right timing, so a laser narrowing down as the robot aims seemed a good visual cue. The combination of enemies turned out quite elegant in the end! Snipers give players that quick rush of adrenaline as they have to navigate their proximity as quickly as possible to avoid laser shots, whilst the slower paced flying bomb flushes out players that are too slow progressing through the level. By the end of the afternoon, I had a playable infinite runner with basic graphics and pretty satisfying gameplay.  The movement jumping from wall to wall & dynamic camera felt really good, and the two enemy types kept gameplay together nicely.  Since the game was very much publishable by that point, I decided to call it a day.  I would do some more polishing on the game if time allowed, but from my past Shenanijam experience I knew “admin” stuff is quite time-consuming and should be the next area of focus.

So day 3 was therefore spent on everything around the game: itch.io page, description, screenshot, thumbnail.  My primary intention was to have a decent itch.io page for my entry.  My reasoning was it would entice fellow jammers to try the game, meaning I would get more feedback.  I am convinced that having good screenshots has a big impact, so I loaded FRAPS and set to capture some cool action shots.  One thing I also like is adding character inserts + descriptions to screenshots, to make them look more fun / dynamic.  This was easily done with a bit of Inkscape magic!

The Shenanijam rules asks for a video to be attached to the entry, showcasing the game.  I decided to spend as little time on this as possible.  I spent hours on my 2017 Shenanijam entry creating a full fledged trailer.  Looking back, this was way over the top and that time could have been spent on the game.  As a result, my video this time round was a simple 30 seconds playthrough.  Thanks to the game flashy colours and screen rotation, the video came out quite fun!  It was wrapped up under a hour, and I used spare time to do some more work on the game. I also wanted a catchy thumbnail, which brings me to the next thing: the game title.  By that point, I had decided Sticky League of Justice was ok, but not great.  I spent the morning trying to think of something better.  Inspiration suddenly came to me when I thought of the movie KickAss, a firm favourite of mine about fake-super hero vigilantes!  Since my game was about a Sticky vigilante, the portmanteau title came naturally: StickAss!

Although a bit silly, it had a nice ring to it.  This also helped with the thumbnail.  Since the KickAss poster is basically the movie name with the hero’s face in the middle, I tried the same with Stick Ass.  I also happened to really like the little ninja looking hero sprite I had created in InkScape, and the two merged nicely.  After a few colour trials, I opted for flashy red + yellow.  Looking back, it is very much like the Kill Bill 2 cover, although not my intention at the time!

StickAss had a good run during the voting period, receiving no less that 23 ratings and a lot of positive comments.  Mostly, people liked the minimalist graphics and the dynamic camera movement.  Almost everyone commented the game was too hard – and in hindsight, it was!  I was worried this would negatively impact the balance score, but it didn’t get slated too badly. I am really pleased with the result.  StickAss plays great and I find the simple jumping mechanic very satisfying.  Keeping the scope down also meant I had a pretty enjoyable jam weekend!  I only worked on the game during the day, kept my evenings free and even managed to catch a movie at my local cinema.  The multiple themes and jam achievements really helped narrowing down the core game concept quickly, which in turn meant I was able to move to building the game and polishing things off in a timely fashion.  Overall, great experience and I am looking forward to Shenanijam 2019!

I have also decided to carry on working on the game, and spent the last month or so working on an Android port!  I really like the overall game mechanic and am confident there is a good concept here for a casual mobile game à la Flop Rocket!  My baby girl was born shortly after the Shenanijam and time is short these days, but I am optimistic I’ll be able to release it soon!

So stay tuned!  More blog posts to come shortly with progress on development 😉 Hope you enjoyed reading this shenanijam postmortem!  You can play Stickass here on itch.io.

Please leave a comment on the game page, rate it & spread the word if you like it!